I alway lament not having creative Halloween costumes from year to year, as well as not having a stash of lazy-man costumes (i.e., mass produced costumes that I can just throw on when needed). But last year, some time during late summer, I had a genius idea. Or at least I think it was genius.

It had been less than a year since 45 came into office and it felt like the country was getting ready to burn down or that we were going to end up going to war with somebody, anybody, with his fanatical ravings from one day to the next. Overt white supremacy was making a fashionable come back with the full support of our current administration. The news cycle was basically reality TV.

Wonder Woman had also just been released that summer, and I begrudgingly went to see it with my best friend during a visit to NYC (it was a good movie, surprisingly).

With all the madness, I decided to embrace it. Rather satirize it. Basing my costume structure off of Wonder Woman’s outfit, for Halloween I was….*drumroll*….. 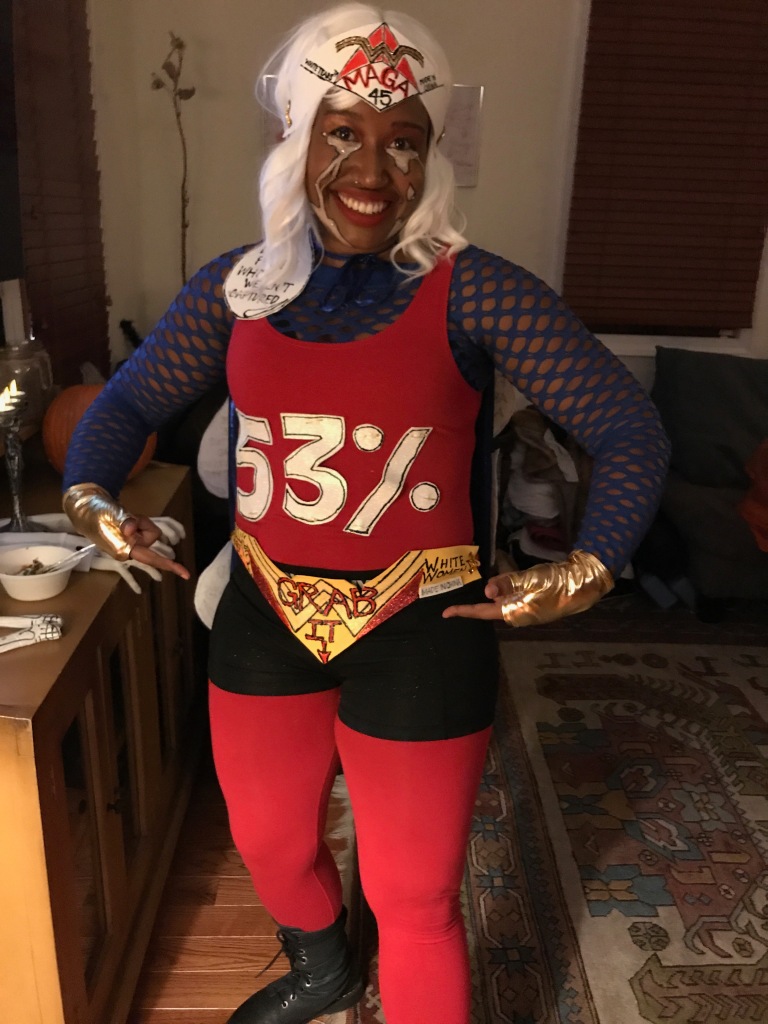 My crown, Made America Great Again, with its golden WW logo, not for Wonder Woman, but for the White Women

My chest, proudly proclaimed my membership to the 53%

My belt, boldly emblazoned with the most well-known proverb of our pussy-loving leader:
“GRAB IT!“
featured an artistic replica of his stately, orange-hued, profile

(as with all of our leader’s products, everything was Made in China)

My cape, carried the sea of White Tears™ (and the salty statements that produced them)

My face, left the tracks of my (white) tears 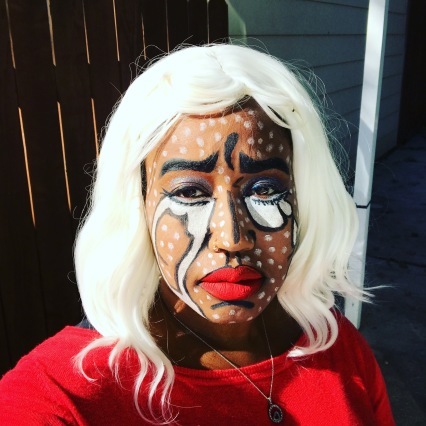 Day 2: I got more detailed

I got to wear this costume, not once, but twice, because Halloween is a multi-night venture in New Orleans. Both nights had some wardrobe malfunctions, since much was safety pinned together (I really need to learn how to sew and use better quality materials), as well as some missed photo opportunities (I didn’t get the Wonder Woman pose), but overall it was a hit! I did get one unexpected photo on Halloween night. At the bar we were at, a man dressed as Trump just happened to walk out on the balcony. So we captured this absolutely ridiculous photo:

My costume ended up generating a lot of conversation, especially once I turned around and people saw my white tears. It became an interactive costume as people pulled up and read all the real quotes from their fellow countrymen. I had to do a lot of explaining about the 53%, mostly to other white women, who somehow didn’t know their sistren voted in such large droves for Cheeto-in-Chief. It was educational; maybe now that they know how prolific they are, they’ll get their people the next time, #nowhitenonsense.

Anyway, I think I’m tapped out on creativity for this Halloween, I may have to find something quick and dirty with low effort.