Part of my Journey to 30 was to go on 30 “dates,” with date loosely defined as going somewhere new or participating in something I haven’t done yet in the region.

The Arts Council of New Orleans describes Luna Fête as and event that “transforms New Orleans’ historic architecture into a playground of light.” The four day festival takes over Lafayette Square and projects moving artwork onto Gallier Hall in a mesmerizing show. I’ve been wanting to see this for the last couple of years, but it’s either bad timing or inclement weather. I made it this time. I didn’t visit any of the other art installations around Lafayette Square because the weather had been so poor in the days before that the square was a mud pit, but I did see the show on Gallier Hall. It was cool, it wasn’t life changing. I’d go back this year and maybe see the rest of the installations.

I’m not sure what I did really meets the standard. I went to  Big Freedia’s Holiday Bounce Around the Block, a holiday block party of bounce and other music. It was at the Art Garage in the Bywater, so it was pretty hipsterly attended, which is why it got kind of weird. I think it was a great event idea, the concerts were staggered at different bars on the block, and Big Freedia was really committed to making sure everyone attended all of the preceding acts and didn’t just sit around in the garage waiting for her; she literally gathered people up and walked us from venue to venue until her show started. Her show was great as usual, but it was the audience that made it a less than ideal experience.

White folks at concerts with legendary Black performers as a rule don’t have any sense of decorum. None. They drip in all of their entitlement so they can have the full “experience,” to get the perfect IG story to say they saw that or did that. It’s like when they go to another country and participate in a local cultural event, dressing up in traditional attire and giving it 100%, but always in this performative, I’m-doing-this-weird/crazy/non-white-thing…look-at-me! manner.

They have ZERO chill. If there’s an inch of space in a crowd of Black people, who, btw, have strategically arranged themselves so that everyone has just enough personal space (an arrangement that is just tacitly understood–you look to your left, your right, in front and behind you to see who’s around; to give and receive that look or the nod, so we all know what’s up), without fail, a gaggle of white girls will capitalize on that inch of space, with no shame. They’ll smile innocently, holding hands, and apologize profusely as they push their way through you, and you’ll let them through because they insinuate that they’re meeting up with someone specifically. But then they stop directly in your line of site. Right in front of you. They didn’t just want a closer view, they wanted YOUR view, specifically. And as soon as they get in your space, they turn their demure innocence off and proceed to dance wildly, hands in the air, hands in their hair so that you can taste their shampoo. Just no regard for anyone standing around them that now has to duck every time they swing their arms around when, if anything, they should be bent over shaking their ass.

Anyway, it wasn’t a great audience experience. And it got worse after Freedia invited people on stage, as she usually does, to twerk. It’s usually a lighthearted, humorous few minutes. But this got gross. Everyone was trying to one-up each other, and since most of the folks on the stage couldn’t actually twerk, clothes started coming off. One white woman turned around and yanked her yoga pants all the way down so we could watch her shake her bare ass.

Before the magic of Mardi Gras and St. Joseph’s night, the Indians have to rehearse their performance, and they do this in public spaces, certain bars and community centers, and people can come and watch. They’re not in costume and you basically have to mind yourself and get out of the way when they say (or shout, rather) to move. It was a surreal experience. Depending on where you go and what day of the week you go, there will be different tribes that show up, uptown or downtown Indians. One group will start in that spot and then another group will show up and they’ll perform their rivalry. Whoever said African Americans are disconnected from the continent of Africa, from the culture and customs of our ancestors, only needs to come watch this rehearsal and know that’s a lie. The performance of fight reminded me of capoeira Angola, where it’s supposed to be in fun and in jest, but can just as quickly turn serious and into a real fight with punches thrown. The rhythms and the songs reminded me of both the rhythms and call and response of capoeira, as well as djembe drumming; it sounded like kuku, and I could’ve easily broken out into the accompanying dance.

As out of place as I felt, on the one hand, because most folks knew each other, were part of a shared community, it also felt so familiar. I certainly will make every attempt to go to rehearsals in the future. When they’re dressed, the costume work is absolutely breathtaking, but in the era of cell phone pictures and videos, it’s hard to be in the moment with what’s happening because everyone’s phones are in the air and everyone is shoving to get a perfect picture of them. This still happens at the rehearsal, I also recorded pieces of it. But it’s to a much lesser degree, folks take their pic or video and then put their phone down, and most people are just there to experience it without proof.

I wrote about this earlier in the year, but it was one of my date goals that I went on with my mom. It was fun. People came in costume early in the morning and were already well into drinking. And folks were nice and gracious with space, especially if you said you hadn’t seen it before–they were willing to move over and let you get a better view. 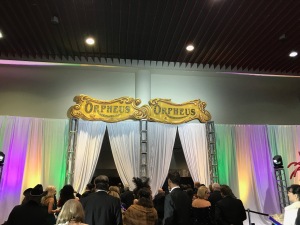 I’ve been to Mardi Gras balls in the past–both Zulu and Orpheus–but I was so drunk at Orpheus the last time I went that I ended up losing my phone, overreacting to losing my phone, and then leaving early. Needless to say I didn’t really enjoy it. So I had to have a do-over. My mom really wanted to go to a ball, so I bought some tickets and we got lucky enough to be seated near the barricades for when the parade rolled through. The only thing was we were near the end of the loop, so by the time they got to us they’d already thrown most of their stuff, which could be a positive or negative depending on how you look at it; it’s not like we really needed any of the beads or light-up toys, it’s just the thrill of catching it.

Since it’s New Orleans’ tricentennial (300 years since founding), and Orpheus is the music krewe, founded by Harry Connick Jr., this year’s performances promised to be excellent. It was basically a showcase of New Orleans’ best. No one was up there for too long but we got to hear a ton of great music including some folks who don’t really perform as much anymore, like the Dixie Cups and Al “Carnival Time” Johnson.