Neither of these places were on my original list of 30 restaurants, which has changed at least six times throughout the course of the year. But I’ve been dying to go to Casa Borrega, so it was silly for it not to be on there, and Cavan became an after the fact replacement. 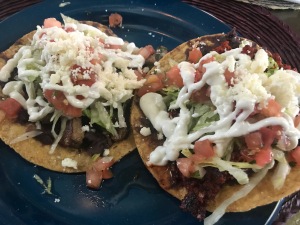 There were so many options on the menu that I wanted to eat, I wish I had gone with more people who all got different things so I could taste them all. Or I can just go back multiple times (isn’t that the point of their business, to visit again?).  We started with some chips and queso, we were both really hungry by that point. For an entree I decided on the tostadas, one with chorizo and the other with lengua (beef tongue). Both were delicious! And it was more than enough food for $10. I got horchata to drink, also fantastic, so by the time I finished eating, there unfortunately wasn’t any room left for dessert. I was interested in trying the tres leches cake. Next time!

I came here with a group of classmates and decided to get a bunch of appetizers to share: Boudin Tater Tots, Salmon Poke Tacos, a seasonal salad that I think had some crab meat, and there may have been another appetizer, but at this point, I can’t remember, which is the problem with waiting several weeks write about an experience and not having any photos. The salmon poke tacos were hands down, the best appetizer I put in my mouth. I’d go back just to eat those.

My entree ended up being the Cavan double stack (a double patty hamburger) with fries. A hamburger doesn’t sound all that interesting, but it was a delicious burger. Certainly would be a great option for the brunch after a long night of drinking.

Being the non-drinking diner, I had to get dessert. But none of the desserts jumped out at me as something I should get, but I ended up going with a strawberry pound cake, a special option since strawberries were in season. The pound cake had some type of whipped goat cheese and candied nuts. I’m not sure what I was expecting, but what I got wasn’t that. It was a pound cake with little chunks of strawberries in it, rather than a cake made with pureed strawberries. The cake itself wasn’t that awesome…it was pretty dense and not that sweet, and a bit dry. It could’ve used some ice cream on the side to moisten and sweeten it up. Or it would’ve been better had it been warmed.

Overall it wasn’t my favorite dining experience, based mostly on my choices, but the salmon poke tacos were the clear winner of the night and I’d go back just for those. The restaurant itself was beautiful, it made for an interesting backdrop, and apparently there’s a bar area upstairs that would also make it worth another trip…once I start drinking again.