A fellow dancer brought two large boxes of citrus to one of our last rehearsals of 2016: meyer lemons and oranges. I’m not a huge citrus fan; my husband on the other hand will eat 2-3 oranges at a time, and since he was sick at the time, I loaded my bag with oranges. I also have a fascination with meyer lemons, and I like the idea of cooking with them, especially making lemon curd or lemoncello. I’ll see pictures on pinterest and think, ‘Ooh, I should try this,’ but once I buy them I chicken out on trying do anything fancy with them, telling myself I just don’t have the time. I figured since I had such a long winter break, I should get over myself and try to make something.

So I grabbed a ton of meyer lemons thinking that lemon curd must require a large number of lemons, feeling encouraged by that thought as several other dancers assumed the same. A week later, and traveling to my parents’ house with the citrus, I was well on my way to chickening out again. However, because they were so ripe, I knew if I didn’t cook with them they were going to end up going to waste. So I finally looked up a lemon curd recipe. I had maybe 8 huge, juicy meyer lemons with me and all of the recipes I found called for about 1/2 cup of juice, which would be about 2 of my lemons, TWO! Guess I didn’t need that many after all.

All of the recipes I could find varied pretty wildly in the amount of eggs, sugar, and butter: some of them suggested just using egg yolks, some required the whole egg, some had 6 T of butter, another 8 T, and still another 12 T. But regardless of how much the other ingredients varied, the amount of lemon juice stayed the same. So I just picked one. I used the one from The Pioneer Woman‘s website, because I’ve tried several other of her recipes, and they’ve always been delicious…incredibly rich, not short on calories, but delicious. Hers was the richer one, with 12 tablespoons of butter and 8 egg yolks (recipe), but it was incredibly easy to make…so easy that it’s pretty absurd that it’s taken me so long to trying to make it. Fancy things just sound like they should be difficult to make, and this was not.

The curd came out perfectly. And from what I learned from my short stint working at a bakery this past year, I covered the curd with plastic wrap, laid right up against the curd itself so it wouldn’t develop a layer as it cooled in the fridge. 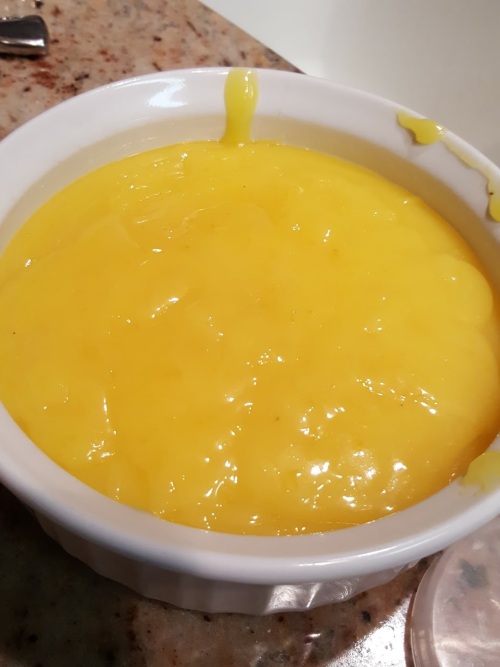 The next day, my mother got to suggesting that I should make a lemon meringue pie. Mind you, we already had a huge Costco apple pie sitting in the house, as well as a carrot cake and another jello “salad” that’s still basically a dessert, and there were only four of us in the house, so why would we need another dessert? But when it seemed like no one would be interested in eating lemon curd on some bread with breakfast or tea, I started looking up pie recipes. Plus I still had a bowl of egg whites from the separated egg yolks I had used for the curd.

I didn’t really feel like making a pie crust, but I also didn’t want the frozen flakey pie crust; I had gotten it in my head that I should have some sort of short bread/cookie like crust, almost like a tart. So I looked up tart crust recipes and found pretty much exactly what I thought I was looking for and made it.

The pie crust came out alright, it was nice and crunchy. The tragedy came later on when the pie sat in the fridge and moisture got in the crust and it got kind of doughy again and hard to cut…then it was just not that appetizing.

Anyway. I made the crust, added the lemon curd to it after it cooled off, realizing I probably didn’t have enough curd for the pie, but it was so rich I don’t think anyone would’ve wanted more in each slice anyway. Then I made the meringue using another pro-tip from my bakery time. I never knew anything more about making meringue than– put egg whites in a bowl, whip them with a hand mixer, add some sugar to stiffen up the peaks, and then pop it in the oven to cook it and brown it. At the bakery, we had to top one of the donuts with meringue, but obviously couldn’t put it in the oven without cooking the donut. So we did an Italian meringue, where you cook the egg whites in the process of making it so it doesn’t have to go in the oven (which if you bake a lot, or eat meringue cookies, which I do not, I’m sure you already knew about this, but my mind was pretty blown).

Not wanting to put the curd or the pie crust back in the oven any longer than it would take to turn on the broiler and brown the meringue, I decided to try and make an Italian meringue. The instructions seemed fairly straightforward, but I was still terrified that I was going to mess this up, especially since I was supposed to make a sugar syrup on the stove to the temperature of “soft ball” stage, and my mom didn’t have a candy thermometer. I gauged the temperature the old school way, dipping a spoon in the cooking syrup and letting some of it drop into a glass of water to see if it formed a soft ball. I whipped my egg whites until they were a little foamy, and then slowly poured in the hot sugar syrup while I continued to whip egg whites. It worked perfectly!

In the end, I think I had way too much egg whites in proportion to the lemon curd…but I think it worked given how delicious the meringue was, and how its lightness balanced out the density and richness of the curd. There were certainly no complaints; that pie was finished before we left to go back home. 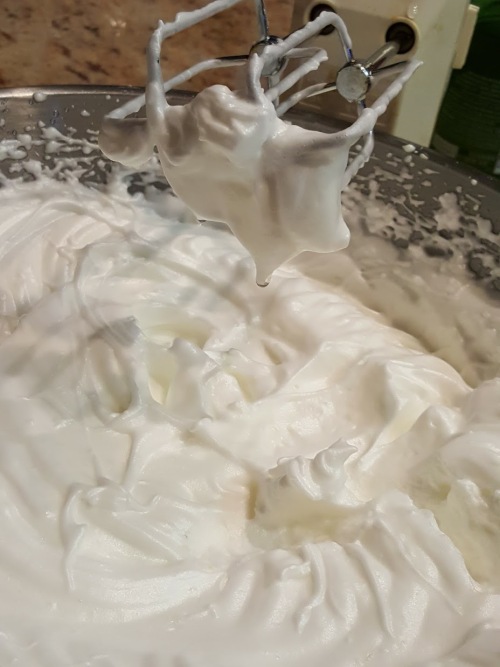 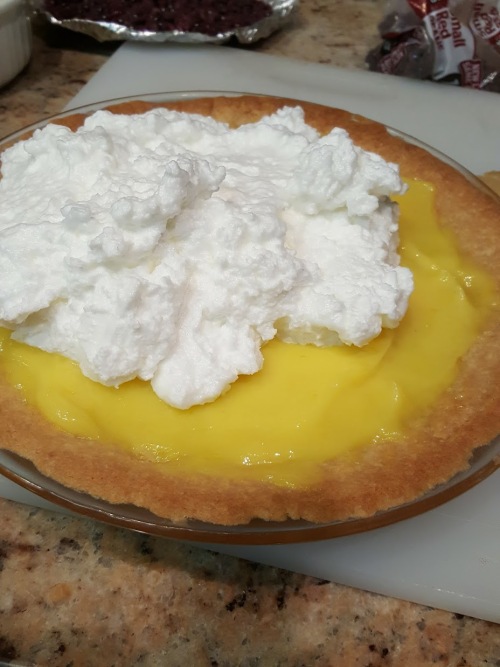 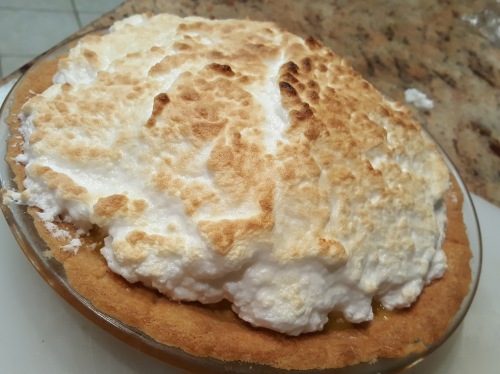 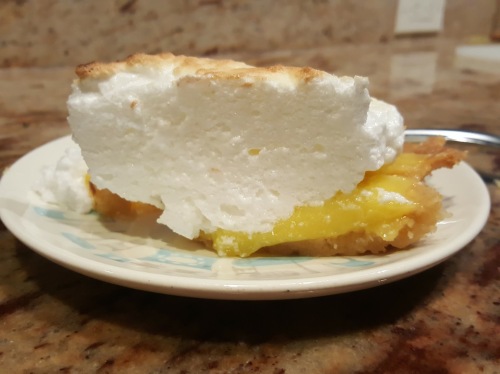