Halloween this year was pretty stretched out for us because there were a number of events I had to/wanted to participate in before the day of Halloween. This being Efrem’s first Halloween EVER, I was pretty hype, but before he even arrived here I got a lot of pushback about participating in Halloween–mostly the whole dressing up and going out part– ‘It’s for kids,’ he says. He kept trying to convince me that we should just stay in on Halloween night, or that if we must go out, that he would just dress normally. Neither choice was acceptable, I mean we live in New Orleans, the land of adults dressing up on a seemingly regular Tuesday, let alone on event surrounding Halloween.

So I tried to ease him into it. We had three nights to go out including Halloween itself, and they all required costumes. It started October 24 with a Halloween party fundraiser that my group, the Sirens, organized to benefit a local non-profit that provides services to youths. That night we went as amalgamations of blaxploitation characters. It took very little effort on his part and no new clothing items that couldn’t be re-worn. For his part he looked like combo of Shaft, Black Caesar, and Savage! and I was some mixture of Foxy Brown and Cleopatra Jones. He just wore some jeans, a black shirt, a leather tassel vest that I had swiped from my mom years ago, and a brimmed hat of mine. I had on some short shorts (or hot pants as my mother likes to call them) knee-high boots, a bright bandana-type shirt, and I fro’d out my hair. We were all good, until I went to color in some mutton chops on his face with mascara, and he argued with me for a minute when we were in Wal-mart buying toy guns (which I made sure were as unrealistic looking as possible; bright colors and plasticky. Lord knows when we were in the aisle all I could think of was John Crawford) because he didn’t want to carry it around all night. Despite the majority of people at the party having no clue who we were dressed as, I thought our costumes came together nicely. 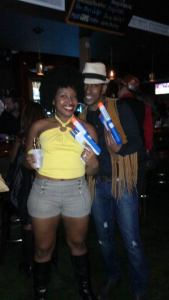 The next night was for Krewe of Boo and the after party. I had to be in full Sirens gear for the parade—corset, fishnets, wig, halloween-y make-up, etc. He didn’t want to dress up at all, but he agreed to re-wear the leather vest with jeans and this time a white t-shirt and the hat, and go as some type of cowboy/farmhand. I left the house before I saw him get into “costume,” but when I saw him after the parade, he just looked like some trendy hipster. Whatever (Jessica, 1: Efrem, 1).

Krewe of Boo was also his first New Orleans parade. He did manage to catch a bead. I repeat: 1 bead. He wasn’t so keen on trying to catch other things; he hasn’t yet seen the fun or the sport of trying to get a bunch of junk that usually ends up in the trash. I’ll get him there, eventually.

The following night was finally Halloween day. My brilliant idea was to go as Frankenstein’s monster and his bride. I had it all figured out. But I think he was really over Halloween at this point. He was not happy that I made him sit down while I whited out his face, added some shadowing, and drew some scars. He was in full pouty face. I didn’t even bother to try and craft the neck bolts because I figured he probably wouldn’t even wear them. The clothes themselves were relatively easy as he just wore all black and borrowed one of my blazers. My all-white didn’t quite come out the way I wanted to because the temperature decided to drop to a balmy & windy 50 degrees. So even as I wore as much warm white as I could find, by the time we got to Frenchmen street, I was pulling on one of his sweaters he thankfully brought.

I feel like overall he had a good time at all of the events despite the costuming, and despite the fact none of the nights quite met my high hopes for an amazing first halloween. We  didn’t get around to carving a pumpkin, decorating inside, nor did we watch a single horror movie. Next year will be better though–we will watch stupid movies, carve a pumpkin, make silly halloween snacks, and have an even better coordinated costume idea– and by then he’ll have had an entire Mardi Gras season to get over the whole anti-adults-costuming issue and confusion around our (admittedly) weird holidays.