Throughout our two years of dating and these last 10 months of paperwork to obtain the fiancé visa, my parents still had never met Efrem. Sure there was kind of a phone call here, and a skype conversation, there, but Efrem had never come to the US and my parents had never gone to SA. It’s a terribly interesting order of operations: boyfriends/girlfriends usually meet the parents before an engagement occurs, but nothing has been “normal” in this relationship, so why would this be any different.

We got up ridiculously early on Saturday morning, and got on the road to drive to Destin. Efrem had told me the day before we left, that he really wanted to stop and see the beach on the drive in before we got to my parents’ house. I thought that’d be fun.

The drive felt longer than normal, mostly because of how tired I was after getting very little and very poor sleep from the night before. It was also unexpectedly cold outside; I guess it was finally becoming fall. We got into Destin around 8:45 AM. I really didn’t want to go to the beach anymore because I wanted my mom to at least meet him before she ran off to a day-long meeting she told me about, and she was going to be leaving around 10, but Efrem insisted on going ,”just for a minute,” to see the white sand.

So we parked at the beach, and we were getting ready to walk down to the sand, when he turned around back to the car saying he needed to get something from his bag. I thought it was odd, but then he grabbed his brush and started brushing his hair. Then I realized, he was nervous about meeting my parents for the first time. I guess he needed a minute to gather himself, even though in my mind he really didn’t need to worry about his hair. While he was brushing his hair, my dad called to ask how far out we were. He was cooking breakfast for us and didn’t want to cook the eggs until we were pulling into the driveway.

We finally got around to walking down to the beach, my shoes immediately filling with cold sand. I didn’t really want to walk down too far; I was tired and now I was feeling kind of dirty, and I didn’t want to keep my dad waiting. But, I have to say, it was really beautiful–the water was an icy green blue, it was crisp, there were no clouds, and there was a set up nearby for a wedding that was going to happen that day.

We walked a bit, like we used to in Cape Town, taking pictures with our phones—selfies, and long shots of him walking away from me. After a few minutes I tried to get him to come back so we could go to the house; I mean we could go back to the beach after breakfast. He wanted to stay a few minutes longer but agreed we should start walking back to the car.

Then he said he wanted to hold my hand, which is pretty typical of him—he’s affectionate, we hold hands a lot, and sometimes he likes to be just a little annoying (in a cute way) and insist on holding hands, or hugging. So I just smiled and put my phone away and gave him my hand to start walking back to the car.

Once he took my hand, he turned me around and started saying something.I couldn’t really tell you what it was he was saying, because all I could focus on was his pulling a box out of his pocket and getting down on one knee. Instant tears.  (SN: I never really understood or thought it was realistic how women would just become blubbering fools when a man got down on a knee and proposed, and while I wasn’t screaming or hyperventilating I think the shock of the moment, if you weren’t expecting it, is what drives women to tears).

Efrem proposed! Granted, we were already getting married (within these 90 days) but throughout this whole process he had never actually asked me to marry him. To be honest, I’d been kind of badgering him about it over the past year–like, how are we going to go through all this and you’ve never asked me to marry you? But, he wanted to do it in person, and here he was, down on a knee, on the beach, and with a very beautiful ring in the box (he picked perfectly, btw). I, of course, said yes, took off the loaner ring my mom gave me (to keep the number of men harassing me to a minimum), and let him put his ring on my finger.

I was just so surprised, and that in and of itself is surprising, because normally if Efrem does try to surprise me, he usually gives the surprise away in some way by asking me information that lets on that he’s about to do something. But this time I was surprised. Even though I kind of knew he had bought a ring because I saw a ‘thank-you-for-your-purchase’ email from a diamond store in his email inbox, which I think he forgot was there when he asked me to look at another email on his computer, I had no idea he had planned to propose this morning; that his insistence on going to the beach and nervousness was not because he was going to meet my parents, but because he wanted his plan to work. I just thought he really wanted to walk on the beach. Fooled me!

Both of us are so awkward though, because I didn’t even kiss him right after, I gave him a huge hug because I was in such shock that I didn’t even know what to do with myself. He was also still nervous and in shock, saying that he had prepared to say a whole speech but in the moment couldn’t remember a word of it. And then on top of all of our feelings, I was remembering that we needed to go (because my dad was making breakfast), so my body was on autopilot still pulling him towards the car even though in my mind I wanted to stay put and celebrate the moment. It was just funny, awkward, emotional chaos that was so typical for the two of us; I mean that was THE perfect proposal for me, I couldn’t have asked for anything more. We stopped and took another selfie, but both of us, especially me, looked so disheveled from the night before and from the drive that our pictures just look… 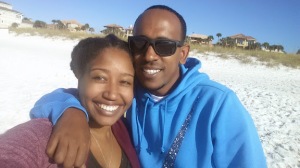 Anyway, we got in the car and drove the 5 minutes to my house and he finally met my parents. It was good. The whole day was good. My dad and him bonded over sports at breakfast, then watched Liverpool v. Hull City (English soccer), and then spent the entire evening watching college football well into the night. My mom was gone most of the day, but when she was back, she had a chance to ask him a few questions in her typical playful-but, ‘no-I’m-serious’ manner, and Efrem said that both of them generally made him feel comfortable and like part of the family. Win!

The day was very weird but better than I could’ve ever hoped for. But, of course, that night, it took a turn for the weirder… 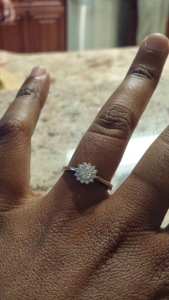