“Fear is temporary. Regret is forever.”

That statement couldn’t be more true. It’s the motto at face adrenalin–the bungee jump at Bloukrans Bridge in South Africa, which holds the Guiness World Record for the highest bridge jump in the world (216 m/709 ft). This past weekend I faced one type of fear (sheer terror, to be precise), and jumped off the bridge. I have to say the first 3 seconds (was it even 3 seconds?), was probably the worst 3 seconds of my life. I actually felt like I was jumping to my death. But once you start to feel the slightest bit of tension in that rope, my brain kicked in and reminded me that my feet are connected to the rope and that I’m gonna be fine. That’s when the laughter began.

I’m not sure why I felt I needed to do this. I mean it’s absolutely crazy. I thought I was okay with it until I got to the edge of the bridge. At that point there is no turning around; you either jump or get pushed on the count of 5, and they count down from 5 really quickly. (watch my jump here)

But it was worth it. It was exhilarating. I’m not sure that I’d do it again, but it was definitely worth it.

This whole weekend was supposed to be a mini-vacation on the Garden Route, which is easily one of the most scenic, beautiful drives you can take. Hands down, South Africa has been one of the most beautiful countries I’ve travelled to in terms of natural beauty. It was a 6.5 hour drive from Cape Town to Plettenberg Bay, and it was beautiful weather. Seeing all the mountains and fields was breathtaking. My favorite part was these random patches of yellow flowers in the rolling fields, which made it look like parts of the countryside were illuminated–almost on fire.

The bungee jump was the featured event, but we were also supposed to go elephant back riding at Knysna Elephant Park, however, the weather was not on our side. Instead we went to Tsitsikamma National Park, had lunch, and took a walk through the forest to the suspension bridge. Still incredibly beautiful.

Despite the unfortunate turn in weather, it really was one of the best weekends ever, and I wouldn’t have spent it with any other person, than who I did spend it with.

When I think about “facing fear,” and all the facets of life that could be applied to, it makes bungy jumping seem like cake. Yea, jumping off of a bridge towards a shallow, rocky ravine is, and always will be, terrifying. But there are so many other fears that are much more difficult to face.

Dealing with interpersonal relationships and your personal insecurities tend to top the list. How do you interact with your family? your friends? your children? your significant other? and how do you deal with yourself–your body image, the way you think others perceive you, the million different thoughts going through your head, your idea of your purpose in life, etc.?

Much of the time we get in our own way; we are our own worst enemy. We keep ourselves from having certain life experiences because we fear even the slightest possibility that we may become financially insecure, we fear that someone will think its stupid, we fear doing it alone, or we fear the possibility of failure. We put ourselves in negative situations because we fear speaking up at the appropriate time or we fear the reactions of other people if we were to speak up. We have tumultuous relationships with other people because we fear open and honest dialogue, we fear vulnerability, and we fear getting hurt.

I’ve heard the statement that fear is paralyzing multiple times, but only truly understood it this past weekend when I stood at the edge of that bridge. My brain shut down and my body went on auto-pilot. I started backing up away from the ledge (which is really a logical physiological response) and panicking a bit. But it was within that less than 5 second countdown that I told myself that I can either let the fear take over–and be pushed off this bridge–or I can embrace the fear and jump.

Allowing yourself to be paralyzed by that fear and to then shrink away because of it, is one of the biggest hindrances for human growth. I think most of us fear our own potential. The fear only lasts a short time, but the regret that comes from NOT trying, acting, speaking, jumping, travelling, loving–will stay with you to your grave. No one wants to think, “what if I had just…? would my life be different?” 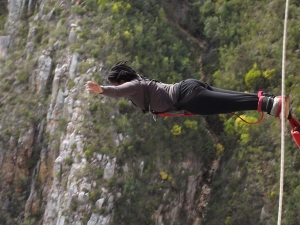