In February 2016 I came across The Life Changing Magic of Tidying Up, aka the KonMari Method, reading it during my ample daily down time. I don’t remember now what compelled me to try it, but doing it was absolutely worth it.

First of all, I don’t think I realized how many things I had. I live in a pretty small house and it’s not as if my belongings were all over the place, but I still had far more things than I actually used, and many that I really didn’t like once I had to actually consider her central philosophy: does this bring me joy?

I followed the directions almost exactly as they were laid out: looking through clothes first, then books, papers, and miscellany/komono in the designated order  (CDs/DVDs, skin care, makeup, accessories, valuables, electronics, household equipment, household supplies, kitchen goods, other).  And I also did as told, to collect all the spare change I find and put it one spot to count later.

The discard/donate process went fairly quickly, it was reorganizing and designating the optimal place for each item that took long.

What I realized during this process was how easy it is to attach significance to things. I don’t mean memories attached to keepsakes like old notes and photos, I mean things kept around for the express purpose of instilling guilt. Especially clothes. I don’t know why we think that keeping clothing items around that no longer fit us is somehow going to be motivation to lose weight. Maybe it works for some people, but I’m sure (through no scientific testing whatsoever) that it doesn’t work for the vast majority of people. If anything it just serves as a constant reminder that you should feel bad about yourself, or that you’ve failed, because one more year has passed and you still can’t wear that dress/pair of pants.

I also kept a lot of stuff around from painful periods of time in the past. Why? I think part of me felt like I was supposed to hang on to these “souvenirs.” Old club t-shirts, letters, programs–could remind me of all the activities that I participated in, my accomplishments, but they also remind me of how much I hated high school, how poorly I was treated by classmates, teachers, and administrators. I do not interact with a single person (well maybe one) that I went to high school with for good reason, so why hang on to items that represent achievements I’ve far surpassed, and that really have no significance other than to dredge up emotional baggage?

For sure there were things that I had kept that were funny to look at 15 years later–like those origami notes from middle school written in gel pen that narrated all of the drama and politics that exist between 12-13 year old girls. But the vast majority of things I realized I hung onto were symbols of guilt: not getting back to my ballet body, not producing this show, not finishing that second/third major in college, not writing a masterpiece paper, not telling someone (who really needed to be told) about themselves, and so on.

So I picked up each item, I looked at it/read through it, I thanked it for serving its purpose, and then I got rid of it. You can’t get rid of emotional baggage if you’re still sitting on a pile of actual baggage.

A year and a half later, all of the suggestion that were given for how to organize your clothes, household, papers, etc., are still in place. My closet and drawers are still organized, I still fold my socks, all of my important documents are still neatly organized and easy to find–including the fifty million warranties and instruction guides for every gadget and appliance–AND, we regularly have a practice of putting all of our extra change in jars, which is a really nice bonus check every year (the last time we emptied them there was over $200).

My only caution: if you’re broke you may not want to be so thorough in discarding the clothes that don’t “bring you joy.” I’m looking at these pictures of the things I donated and wondering what the hell I was thinking giving away so many things that I could wear to school–I don’t have any dresses in this hot New Orleans weather! But then again, because they didn’t bring me joy, I barely ever wore them anyway, so… 🙃

Bottom line: if you haven’t read the book, read it. And then go do it. It has absolutely simplified my life and changed my mentality on consumption and retention:

And most importantly, her central philosophy has other applications beyond your physical environment. You can just as easily reframe it to apply to the people you keep around in your life; which is just as, if not more, important for curating a happier life: Does this person bring me joy? No? *Discard* 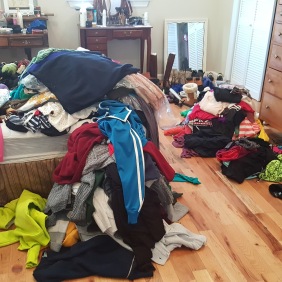 All my clothes on the floor 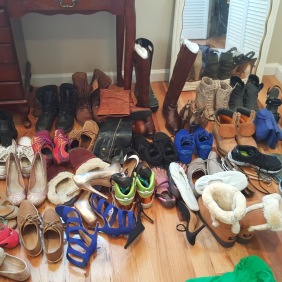 All my shoes on the floor 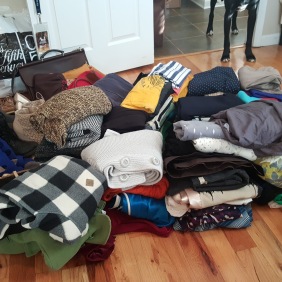 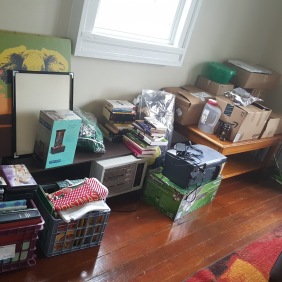 One round of donations–there were several more! 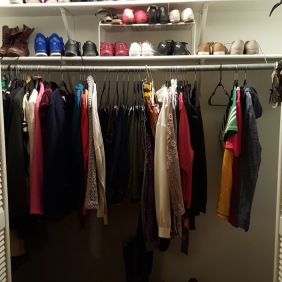 What’s left in my closet

1 reply to That time I KonMari’d My Life…